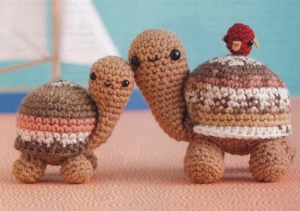 I am in love with this turtle amigurumi pattern. It is from the Crochet Today magazine May/June 2010 issue. The pattern is by Ana Paula Rimoli, one of my favorite amigurumi authors, so of course, I have already made three turtles from it and have more planned.

The first turtle I made was in browns. These were the colors used in the original pattern. The pattern crocheted very quickly and was easy to follow. I had no problems keeping count while watching tv at the same 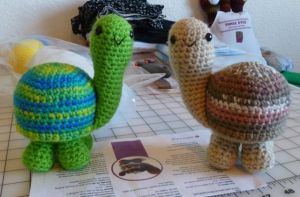 time. I was concerned about the crocheting of the head and neck but it was no problem either. I love the flare it has at the bottom of the shell. On the last row, you HDC in the front loop and then leave 8 stitches un-crocheted. This gives you the back loop for sewing the bottom of the shell on to so no stitches are visible on the shell side and gives you a nice opening for stuffing and sewing the head on. This made the stitching of the turtle together easier than most amigurumi’s. The legs also stitched on easily being centered around the first round of the bottom of the shell. I used a small amount of embroidery floss to stitch a mouth on the turtle and it was completed. 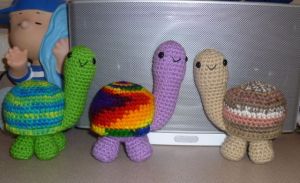 I made the little bird pattern that came with the turtle pattern. But I was not happy with how the little bird looked on the back of my turtle, so I did not stitch the bird on the shell of my turtle. I decided that if I made the turtle for an adult as a decoration, I may add the bird, but if the turtle was going to a child to be played with, the bird would just be in the way and would soon be tore off with lots of play time. Since I don’t know what the fate of my turtle is to be yet, I didn’t give it the bird. 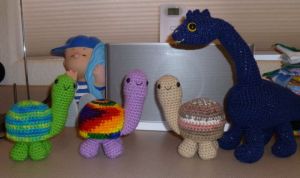 With the first turtle complete and such a delight to make, I took a look at my other variegated color yarns and quickly found the blue/green/yellow to make the shell for another turtle. I needed a sea turtle to go with my land turtle. It was as much fun as the first one to make. I also found a variegated multiple color yarn. I think the yarn is called fiesta mix. I decided to go ahead and try a turtle  from it as well. Although, I like the first two turtles better, I still think the fiesta mix turtle turned out very cute. I gave him a slightly off set smile to give him a little bit of character. The husband says the fiesta mix turtle is his favorite so far.

On my last trip to Walmart, I actually bought another skien of variegated yarn that I did not already have to make yet another turtle. How many turtles do I need? Several I guess.  So stay tuned to see the herd of turtles I want to make.

P.S. Sara loves the turtles too. 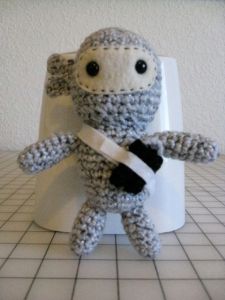 Hawk, ninja #5 in the husbands army, is a stealth fighting machine as he battles evil doers with his sleek nun-chucks.

Hawk comes from the teddy bear pattern found in Amigurumi World by Ana Paula Rimoli, minus the ears of course. The husband said to try and make bigger ninjas for the next ones, so I returned to the regular teddy bear patterns. Hawk is the largest ninja of the group so far. I was going to make him solid gray, but while looking at the yarn at Walmart, I found this new Fiesta yarn from Red Heart and just had to try it. I love the color of the yarn and I think it crocheted up into a nice looking ninja. I made him a felt face like Tiny Bears instead of a crocheted one like Roja’s and I like it much better. Because he is bigger, I decided to stitch his face down. The husband picked black floss to sew the face on with. I was not sure about the using the black floss on the felt but tried it anyway. After completing the face it reminded me of a hawk, thus this ninja’s name. Once again I crocheted his ties from the pattern in my Creepy Cute Crochet book. 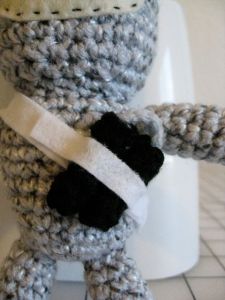 The nun-chucks are a whole other story. I had to make the pattern for them myself. I used a size E hook and black 4 ply yarn to make two tiny handles. I then crocheted a small chain out of gray yarn and tried to attach the chain to the handles. This was not as easy as it sounds. I did a lot of knotting, pulling and cussing when the knots pulled through the handles. It seemed like it took me longer to make his nun-chucks than it did to make Hawk himself. When the nun-chucks were finally complete, I knew they would not take a lot of abuse so I carefully glued them tightly to Hawks body. I hope this will protect the nun-chucks if Hawk is every played with as a toy. The nun-chucks look good, but I don’t know if any of the other ninja in the army will have a pair. Stars and Swords were much easier to crochet.

So now the army is half complete. Even though the husband likes the looks of Hawk, minus the Fiesta gray yarn, the husband said to go ahead and try other patterns to complete his army.

P.S. We saw the movie Despicable Me, and now the husband thinks he needs a minion of minions. I told him not until the ninja army was complete.