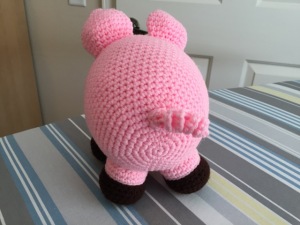 To be or not to be. That is the bacon I ask from thee.

It was the big eyes, of course, that I fell in love with, and that made the decision to make this pig my next amigurumi project easy.

I started this project by digging through the yarn stash to find just the right color of pink for this pig. I found a small skien of pink yarn that was the perfect color, but would it be enough to complete this pig? Hhhhmmmm. I decided to go ahead and go for it. If there wasn’t enough yarn, I might have to get creative with the colors later. 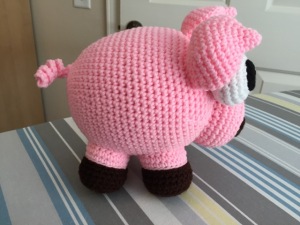 I knew that if I was going to have to match pink yarn colors later in this project, I would want this pig’s body to be all the same color so I started the crocheting of the pieces with the body first. After finishing the body, I knew the next part I wanted to match colors was the snout, so I crocheted it next, and that was followed by the ears.

By this time, my skein of pink yarn was getting pretty thin, but I crocheted on. The legs were next to be crocheted. Luckily, there was not too much pink yarn used to crochet the legs. After finishing the legs, I was down to a very tiny ball of pink yarn with only the pigs tail left to crochet. 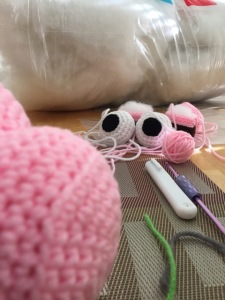 The stitching together of this pig was a slow process with lots of stuffing involved. Luckily as I stitched the pig together, I did not need any of the extra pink yarn for the stitching. This left me with enough pink yarn from the original skein to make the pig’s tail. After crocheting the tail and stitching it on, the pig was complete. 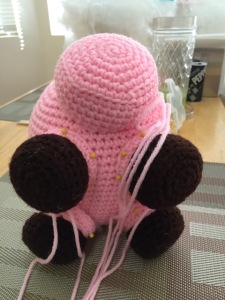 It was very easy for me to pick a name for this pig. He was named Hamlet early on in the stitching process. As expected, Hamlet is very cute and I love his big eyes. He is now waiting for a good home, preferably with someone who is not hungry for bacon.

Until then, crochet forth and bacon on!